By KKN TEMATIK REMPAK 2019 03 Dec, 2017 Post a Comment
Binary compounds are those that contain two different elements.Ternary compounds, we will discussed in the next article, contain three diferent elements. Within each of these two groups there are various categories of compounds that have different naming rules. Figures 2 outlines the general classes of inorganic compounds. 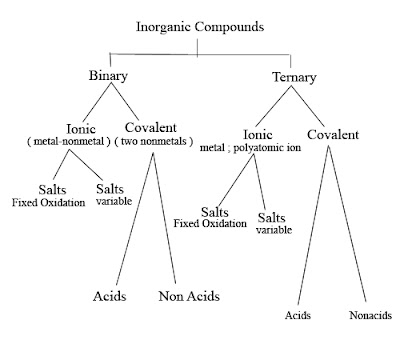 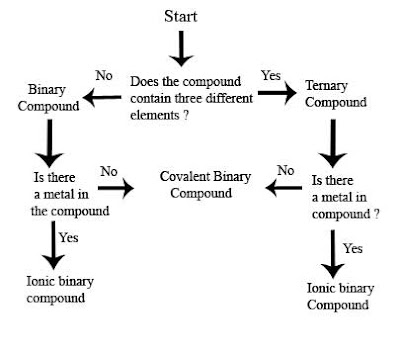 Before looking at representative ionic substances, let us see how simple ionic compounds are named. We shall start with binary ionic compounds, those that contain two different elements. First name the metal, and then write the nonmetal, replacing its ending with ide.

What if the metal ion component of a binary ionic substance has a variable oxidation state ? We mentioned that metals can exist in more than one oxidation state;consequently , more than one binary compound can result when such a metal combines with a nonmetal. For example, two chlorides of copper are known, CuCl and CuCl2. Our naming system must provide a means for distinguishing between the two. In the stock system , we modify the above rules for naming ionic substances to include the oxidation state of the metal ion.

Specifically, we write the full name of the metal followed by its oxidation number expressed in roman numerals in parentheses :

To write the complete names of CuCl and CuCl2, it is only necessary to append the modified name of the nonmetal ( nonmetal-ending + ide ), chloride. Therefore, CuCl is copper(I) chloride, and CuCl2 is copper (II) chloride , Note that a space is placed between the right parenthesis and the nonmetal name, but no space is written between the left parenthesis and the end of the metal name. When reading names expressed this way, state the metal name followed by the number - copper one and copper two.

The old system of nomenclature handles this situation in a different manner. To name the chlorides of copper, two endings , ic and ous , are added to the classic name of the copper, cuprum. The ending ic designates the higher oxidation state, while ous identifies the lower oxidation state of the metal. For CuCl, where Cu is in +1 state, we attach ous to cuprum - um , giving cuprous :

In a similiar manner , ic is affixed to cuprum - um, yielding cupric :

Write the names for the following compounds using the stock system and the old system a. HgI2 b. PbO2 c. SnF2  d. FeO

b. PbO2, the total oxidation number for two oxygens is -4. In order to add up to zero, Pb's oxidation state is +4. The +4 oxidation state of lead is the higher one, necesitating that ic is placed at the end of its old name, plumbum.

Okay, thats about naming binary ionic compound, The Next article we will discuss about Naming Binary Acid, Covalent compound , and Base.

Next > Naming Binary Acid , Covalent Compound and Base