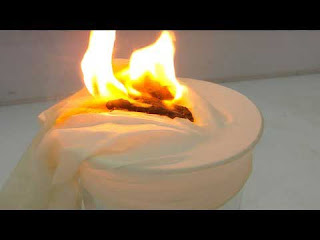 Although the techniques of gravimetric analysis are applicable to a large variety of substances , we have chosen to ilustrate them with an analysis that incorporates a number of other techniques as well. Chloride ion may be quantitatively precipitated from solution by the addition of silver ion according to the following ionic equation :

Silver chloride is quite insoluble , the addition of silver nitrate solution to an aqueous solution containing chloride ion precipitates AgCl quantitatively. The precipitate can be collected on a filter paper , dried, and weighed. From the weight of the AgCl obtained , the amount of chloride in the original sample can then be calculated.

This experiment also ilustrates the concept of stoichiometry . Stoichiometry is the determination of the proportions in which chemical elements combine and the weight relations in any chemical reaction. In this experiment stoichiometry means specifically the mol ratio of the substances entering into and resulting from the combination of Ag+  and Cl- . In the reaction of Ag+ and Cl- in equation , it can be seen that 1 mol of chloride ions react with 1 mol of silver ions to produce 1 mol of silver chloride.

The number 0,2474 is called a gravimetric factor. It converts grams of AgCl into grams of Cl. Gravimetric factors are used repeatedly in analytical chemistry and are tabulated in handbooks. The percentage of Cl in the sample can be calculated according to the following formula :